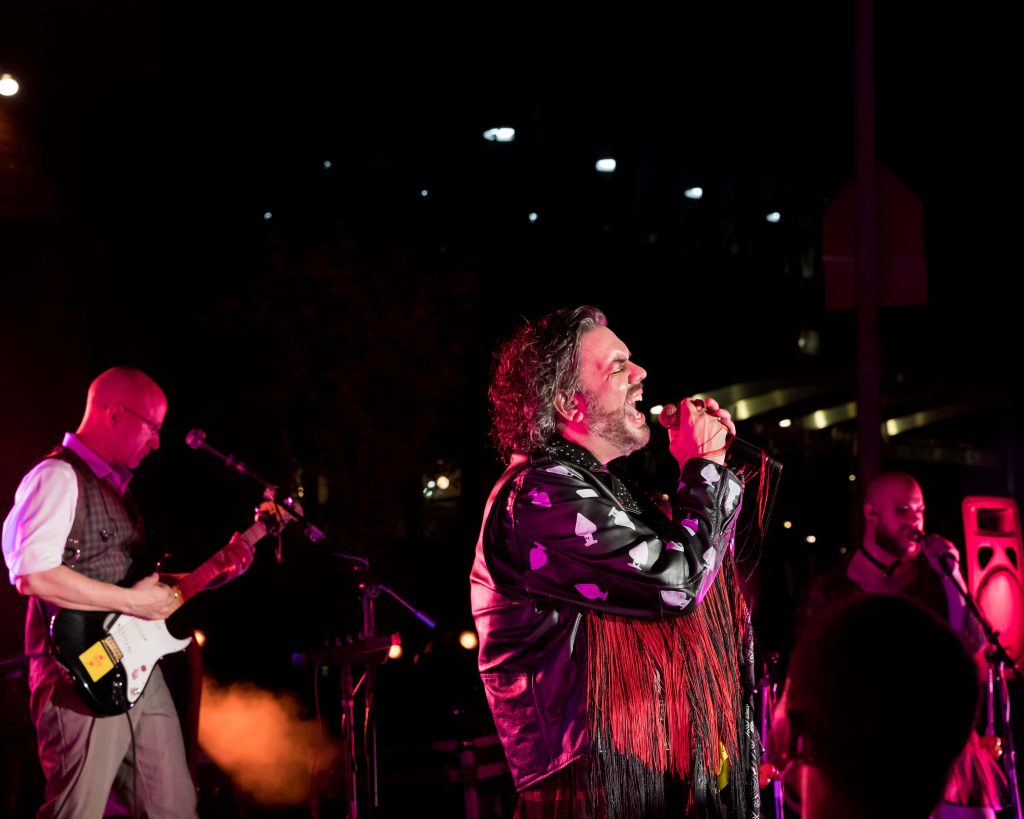 If I had to identify the exact moment when I felt like New York City had really come back from the Covid-19 pandemic, it would be when I first heard the soul-rattling voice of Oso Fabuloso blasting out of the speakers set up around a makeshift stage on 52nd Street. The new rock musical, Oso Fabuloso & the Bear Backs!, certainly marks the heroic return of INTAR Theatre, the company hosting this outdoor musical (and doing a killer job). The show has music, heart, naughtiness, and a little bit of philosophy — everything that makes New York great. Whether you’re a bear, an otter, a twink, or a twunk, this is the show you need to see this Gay Pride month.

Oso Fabuloso is the alter ego of playwright C. Julian Jiménez, who performs this therapy-session-cum-rock-concert with the help of bearish backup singers Grizz (Joseph Distl) and Gummy (Vasilios Leon). The band (Robert Cowie on keyboards, Ray Rizzo on drums, and Jesse Sklar on bass) is led by guitarist and composer P.K. Variance, who also plays the role of Oso’s even-tempered analyst, Dr. Calvo. Together, they help Oso unpack his failed relationship with a daddy bear whom Oso gives the flimsy alias “Srichard.” Their romance followed a fairly typical homosexual lifecycle: Mediocre hookup sex leads to dates leads to cohabitation leads to bed death leads to adventures in non-monogamy leads to breakup. It would all seem terribly banal if recounted to you over a martini at Hardware Bar, but here it is transformed into a rock epic of monumental importance.

Variance and Jiménez use the rock idiom to convey the lightning bolt of emotions that one feels in the thick of a doomed relationship. Oso sings the hirsute blues in “The Way I Was Bred,” while a song about infidelity, “War Is Declared,” has a ska vibe. Oso’s number about his refusal to let Srichard treat him like token Puerto Rican arm candy, which contains the lyric “spic and span, I am not that man,” is likely to leave some audience members clutching their pearls in our sensitive age — and what could be more rock and roll than that?

That transgressive spirit extends to Timmy Schues’s production design: Illustrations of big hairy men in their underwear adorn the building facade behind the stage, with multicolored hankies tied to the mic stand. Oso wears a glittering sheer plaid caftan with a leather jacket, the hieroglyphs on which will be instantly recognizable to anyone who has ever stepped into an 8th Avenue sex store. Alberto Ruiz lights the show with moving LEDs while engineering perfect rock show sound balance. A small regiment of stage crew ensures that the show goes off without a hitch, which is pretty impressive on a street in Midtown Manhattan.

Temperamentally, Oso Fabuloso feels like Hedwig and the Angry Inch, but a lot riskier. Instead of confining his antics to ticket buyers within the Belasco Theatre, Oso sings about Craigslist hookups and giant phalli while strutting around his pop-up stage on a Hell’s Kitchen side street, attracting the attention of neighborhood people out walking their dogs and children. It is a testament to both the quality of the songs and the sheer magnetism of the frontman that a crowd outside the ticketed seating area continued to grow as the show went on.

This was despite the gentle trickle of rain the evening I attended, which practically felt summoned by Jiménez, with his wild eyes, theatrical gestures, and powerful vocals. He’s like the long-lost love child of Grace Slick and Sylvester. As the wind blew through his increasingly damp hair and he belted toward the heavens, I couldn’t take my eyes off him. Oso Fabuloso is serving us Meat Loaf con sofrito and we eat it all up.

It’s a somewhat unexpected and completely delightful turn for the playwright: Jiménez has both impressed and confounded me with his two previous plays at INTAR (which were written under the name “J. Julian Christopher”). His 2016 play, Locusts Have No King, lingers in my memory as an example of the power of the slow reveal, while 2020’s Bundle of Sticks, which connected gay reparative therapy with the legacy of Australian colonialism, conveyed the playwright’s expansive and occasionally baffling perspicacity. After seeing Jiménez perform as Oso, I now feel that I have a better appreciation for the rebellious queer imagination from which these stories sprung — and I’m 100 percent here for it. Is Oso accepting groupies?

This website uses cookies to improve your experience while you navigate through the website. Out of these, the cookies that are categorized as necessary are stored on your browser as they are essential for the working of basic functionalities of the website. We also use third-party cookies that help us analyze and understand how you use this website. These cookies will be stored in your browser only with your consent. You also have the option to opt-out of these cookies. But opting out of some of these cookies may affect your browsing experience.
Necessary Always Enabled
Necessary cookies are absolutely essential for the website to function properly. These cookies ensure basic functionalities and security features of the website, anonymously.
Functional
Functional cookies help to perform certain functionalities like sharing the content of the website on social media platforms, collect feedbacks, and other third-party features.
Performance
Performance cookies are used to understand and analyze the key performance indexes of the website which helps in delivering a better user experience for the visitors.
Analytics
Analytical cookies are used to understand how visitors interact with the website. These cookies help provide information on metrics the number of visitors, bounce rate, traffic source, etc.
Advertisement
Advertisement cookies are used to provide visitors with relevant ads and marketing campaigns. These cookies track visitors across websites and collect information to provide customized ads.
Others
Other uncategorized cookies are those that are being analyzed and have not been classified into a category as yet.
SAVE & ACCEPT